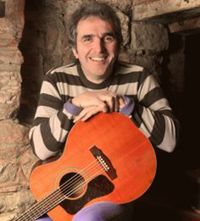 Lovely to welcome back Jez to Edinburgh FC after the pandemic forced postponement of our earlier plans. A double nomination in the 2015 BBC Folk Awards for Best Singer and Best New Song was a timely reminder of Jez Lowes standing in the UK folk and acoustic music scene. Not only he is one of the busiest live performers in the country, but his songs are among the most widely sung by other performers, whether by long-established acts like Fairport Convention, The Dubliners and Bob Fox, or by the new breed of stars like The Unthanks, The Young Uns and The Duhks.

A fave act at Edinburgh FC, Wendy was last with us at our Burns' Supper in "Oor Rabbie" and is most welcome back with her band tonight (they should have been during lockdown!). Wendy's wide musical interests have led her to sing and play at folk and jazz events worldwide. She has composed music for theatre and film and has vast recording experience as a guest on albums ranging from The Complete Songs of Robert Burns, and The Complete Songs of Robert Tannahill to The Pearlfishers' Sky Meadows.

Her own CD's: A Breath on the Cold Glass, Two Loves (Lochshore) and A Shirt of Silk or Snow (Fellside) show her love of song as well as instrumental work; she was nominated in the Scots Trad Awards 2010 as Traditional Singer of the Year. Her commissions for Celtic Connections, Daybreak on the World's Edge, poems of William Soutar set for cello quartet and three male voices, and a large scale work based on Lewis Grassic Gibbon's Sunset Song feature some of the best traditional musicians in Scotland.

Wendy continues to guest with musicians of many styles the cello being well suited to the dark realms of the singer/songwriter to teach at workshops and festivals and, of course, perform with the Wendy Weatherby Band!

THE BAND Sandy Brechin, from Edinburgh, is one of the greatest exponents of the Scottish accordion. He is well known throughout the world, having toured and recorded extensively with Bùrach, Seelyhoo, The Sandy Brechin Band and his incredibly popular ceilidh band, The Sensational Jimi Shandrix Experience. Theatre shows include Mull Theatres The Accidental Death of an Accordionist and The Mini-atures for the Highland Festival.

Stevie Lawrence was initially involved in rock bands from his school days and was active in the Glasgow pub rock scene before turning to acoustic and roots music in the early eighties. He worked with Cruachan for six years, playing festivals and folk clubs all over Scotland before joining Iron Horse, recording three albums with the band as well as touring all over the UK, Europe, Russia and Egypt. After leaving Iron Horse, Stevie carved a career as a session musician and producer.

Scottish fiddler Fiona Cuthill from Glasgow was classically trained by Bill Baxter (who played with the famous Halle Orchestra) and then discovered the world of folk music after leaving school. Since then, she has been involved primarily in the ceilidh scene, playing all over the country with a variety of ceilidh bands. Along with The Wendy Weatherby Band, Fiona also plays with Rallion, and as a duo with Stevie Lawrence. Fiona teaches fiddle at Glasgow Fiddle Workshop.

We've not done this before. That is, we've not put ceilidh dancing into the EFC programme of events. Why's that? No-one really knows why not - unsuitable past venues perhaps, but we think it's simply not crossed the collective consciousness of earlier EFC committees. So, anyway, we thought we'd give it a try (or two - there's a second on Wednesday 29 June 2022, the last event of our current season).

The band is led by EFC's own resident compere - Dave Francis - who has many years of experience playing in dance bands (and numerous other music-related activities) and calling the dances as well. Jenny Gardner (fiddle, viola, vocals, bass, guitar) is another vastly experienced musician who was a member of Salsa Celtica, Rock Salt and Nails, The Poozies and Eat the Seats. And then last but by no means least John Young.

At the very least it will be an interesting event but we think it will be a crackingly enjoyable knees up of an evening!