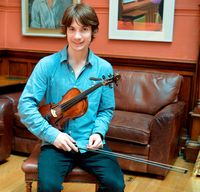 Scots Trad Music Awards 'Up And Coming artist of the year', fiddle player Ryan Young brings new and exciting ideas to traditional Scottish music. He recorded his debut album with triple GRAMMY winner, Jesse Lewis, who has worked with the likes of Yo-Yo Ma and Bela Fleck. Ryan holds both a first class honours and a Masters degree from the Royal Conservatoire of Scotland, as well as being a twice in finalist in both the BBC Radio 2 Young Folk Awards and the BBC Scotland Young Traditional Musician of the Year.

Ryan launched his debut album at Feakle Traditional Music Festival in County Clare, Ireland where he was accompanied by renowned guitarist, Dennis Cahill (Martin Hayes; The Gloaming). He was nominated for the Horizon Award at the 2018 BBC Radio 2 Folk Awards and was the winner of Folking.com's Best Musician for 2018.

Ryan focuses mainly on Scottish music, bringing new life to very old, often forgotten tunes by playing them in his own unique way. He is very influenced by the fiddle playing of County Clare, Ireland and has been fascinated by the playing of renowned fiddlers such as Bobby Casey, Paddy Canny, PJ and Martin Hayes and Tommy Potts from Dublin.

Ryan's fiddle playing is brimming with fresh melodic ideas, an uplifting rhythmic drive and a great depth of dynamics and precision.

Ryan's sound is very distinctive and he always manages to take the listener on an adventurous and emotional journey in any performance.

Ryan is accompanied by Scottish guitar player Chris Amer who is slowly but surely establishing a reputation for his tasteful, distinctive, musically intelligent playing style. Over the past few years Chris has developed an original sound that utilises space, texture and carefully chosen notes: an ethos that informs both his musical voice as a guitarist and his work as a composer.

Chris was born and raised in Edinburgh, and developed a keen interest in music whilst in high school. Throughout his teenage years he studied with renowned Edinburgh guitarist, Kevin Mackenzie, and moved to Glasgow in 2012 after gaining a place on the prestigious Jazz program at the Royal Conservatoire of Scotland. As well as Jazz, Chris is equally at home playing traditional Scottish music. He personifies, in his playing, the ever blurring lines between the genres.

'...Young's playing is so richly expressive, channelling such deep emotion, that it feels like a dramatic performance in a theatre...one feels that here we have a potential heir to Duncan Chisholm for sheer emotional intensity. It's a remarkably mature debut album from one so young.' – Paul Matheson, Folk Roots 2017

'....His self-titled debut album simply brims over with originality and talent' - www.folking.com (August 2017)

'...the man makes the fiddle articulate the widest range of emotions and illustrations – and listening to him play you realise he is surely in possession of a magnificent gift' - FolkWords July 2017

'Nuance, wit, risk-taking, contrast and above all a real sense of joy in making music were all there in abundance and Young’s solo feature, where he appeared to have been truly possessed by the melodies, was as exciting as it was uplifting' - Rob Adams, The Herald