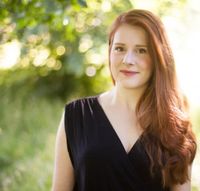 Hannah Rarity is undoubtedly one of Scotland’s finest singers. With her carefully chosen mix of traditional, contemporary and self-penned songs, Hannah earns comparisons to Eva Cassidy and Cara Dillon, whilst standing confidently in her own right.

After winning the BBC Young Traditional Musician of the Year in 2018, Hannah was tipped by The Scotsman as ‘One to Watch’. And so it proved ... Hannah’s musical experience is already very wide and varied, having toured internationally with US folk supergroup Cherish the Ladies, appearing with the Royal Scottish National Orchestra, BBC SSO, Blazin’ Fiddles, Rura and electronic Celtic fusion band Niteworks. She has undertaken featured singer work as part of Brian O’Donovan & WGBH’s ‘A Celtic Christmas Sojourn’ in Boston, USA (2018), as well as numerous UK television appearances (BBC Hogmanay 2015, 2017, 2020) and her own touring throughout Europe and the UK. She was invited to work as co-musical director for the Opening Concert of Celtic Connections 2022. Yes, one to watch indeed.

This summer (2022), Hannah celebrated the release of her eagerly anticipated second album ’To Have You Near’ on which she ushers in a more mature sound, staying true to her background in folk whilst being unafraid to experiment with genre and production.

“Hannah Rarity has a just downright gorgeous voice... no wonder she is in such high demand.” FRoots