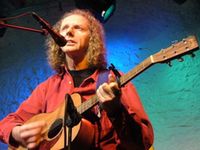 Colum Sands is a universal storyteller who draws on a long Irish tradition of poetic musicality to weave songs for the world. He has performed in over 30 countries around the world confirming the universal appeal of the songs and stories with which he observes the minute and often humorous details of life.

On his travels Colum soon discovered that many of his songs had arrived before him carried by singers in their live shows or recordings - the likes of Andy Irvine, Tommy Makem and Liam Clancy, Roy Bailey, Mick Hanley, Gerard van Maasakkers, Rosemary Woods, Iain McIntosh and Enda Kenny.  He has toured all over Ireland and the UK as well as in Australia, New Zealand, Canada, Germany and Denmark. Colum is working currently on a new album due for release in summer or late 2018.

"An unforgettable, wonderful performer. I've just seen him play to 2500 people in the Australian National Folk Festival's biggest venue and make everyone feel as if they were sitting in his lounge room. He's warm, witty, moving and funny. Steve Barnes, Director, Fairbridge Folk Festival).