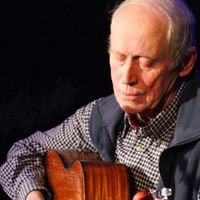 Archie Fisher has replaced Rab Noakes for this event since unfortunately Rab has had to cancel because of ill-health.

"One of Britain's finest song interpreters" (Sing Out). "...seems like Archie invented Scottish folk" (Boston Globe). From a singing Scots family (sisters Ray and Cilla were both professional singers) and known for superbly judged guitar accompaniments, Archie has long been a most highly regarded and respected Scottish folk-singer. He was inducted into the Scots Traditional Music Hall of Fame (2006) and received an MBE for services to traditional music (2007). Along with a stellar international performing career spanning five decades, for 27 years Archie presented BBC Radio Scotland's award-winning programme, Travelling Folk.