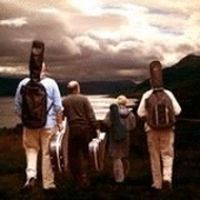 This well-known, local band simply enjoys entertaining. Formed some years back when they all met as members of Nitten Folk Club around 2010 when they got together to perform for a charity concert only to discover that this new band worked for them and their audience. They are now well-accomplished in presenting a range of styles from a-cappella to traditional, contemporary and self-penned material and their shows across Scotland over the past decade or so pre-covid found favour with their harmonies, range of songs and eclectic good humour. Ragged Glory toured extensively as part of the great WW1 commemorative show Far, Far From Ypres that played to sell-out concerts culminating in the Usher Hall, Edinburgh on Armistice Sunday 2018. Audiences at a Ragged Glory gig have always left with happy memories, a smile on their face, a song in their head and, of course, a new awful joke for their repertoire! Clearly a recipe that guarantees another memorable evening at the Edinburgh Folk Club.