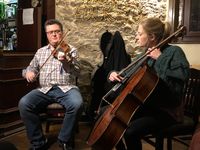 Alastair has been a member of the BBC Scottish Symphony Orchestra since 1997 with whom he has toured Japan, China, USA, South America and throughout Europe, as well as appearing as a traditional fiddle soloist with broadcasts on BBC Radio 3, Radio Scotland and on national radio in the USA.

He released recently his 6th solo album entitled Tunes From The River which features a number of celebrated musicians from the folk music world. Previous recording projects include a critically acclaimed unaccompanied album Alone With History recorded at Crathie Kirk in Royal Deeside which features a mixture of music from great fiddle composers of centuries past including Niel Gow, William Marshall and James Scott Skinner as well as many of Alastairs own compositions.

As a composer, Alastair's music has been used by BBC Alba in documentaries and he was shortlisted in 2021 for a Scottish Award In New Music. He is in demand as a session musician when has worked with many top artists crossing dierent musical genres including Belle and Sebastian, Karen Matheson, Justin Currie, Ricky Ross and legendary Scottish band The Whistlebinkies.

For tonight's performance Alastair will be joined by Alice Allen, one of the countrys leading cellists who is originally from Banchory. Alice studied traditional cello with renowned instrumentalist Natalie Haas and has performed alongside Robyn Stapleton, Patsy Reid, Shona Aitken, John Goldie, Julie Fowlis and Kris Drever to name but a few. Alice recently completed an extensive study involving historic cello accompaniment for the music of James Scott Skinner and others and has been one of Alastairs main collaborators over the past decade, appearing in concerts alongside him throughout the country. Formerly young artist in residence with the Scottish Ensemble, Alice has worked with many of the countrys leading classical performing groups including the BBC Scottish Symphony Orchestra and her most recent recording projects involve her celebrated duo Gaia with violinist Katrina Lee.

a must for aficionados, a primer for anyone with a notional interest in Scottish traditional music (Keith Bruce, The Herald)

There is a breathtaking effortlessness to Savage's musical art: technical and intricate without ever overshadowing the music itself (Su O'Brien, Bright Young Folk)

Alastair Savage is a master of the instrument, both in theory and practice (Ellie Willis, Edinburgh Three Weeks)