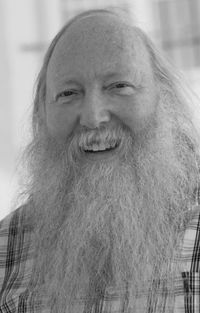 In February 2017 EFC's widely respected chair, Eberhardt "Paddy" Bort died suddenly (pic right). The club ran a fund raising concert at Edinburgh's Queen's Hall in Paddy's memory during June 2017 and created the Paddy Bort Fund (PBF) from the concert's profits. The sole intention of the PBF is to provide financial support to professional folk performers who may be in financial difficulties through no fault of their own.

The COVID-19 pandemic meant that this fund became more necessary as time passed. Many, many professional folk musicians were and still are
severely hit as a result of the pandemic.

Those of us who have an interest in the well-being of professional folk performers need to help support those who give us all so much pleasure and entertainment in normal times.

Initially in mid-2020 when we began publishing Carry On Streamin, we set out to raise £10 000 (or more as necessary). That was realised by about mid-September 2020.

So, it was necessary to set another £10 000 target and that target is still out there although we've raised about £7 000 towards it. Once again we're appealing to the folk fans and our friends out there across the world to contribute.

As of the present dateline we've distributed almost £17 000 to almost 70 performers so 'do the math' as some folk say - we need to continue our fund-raising effort to replenish the rather depleted PBF.

We are of course stepping up our own direct fund-raising efforts ...

So, while EFC may have had to close its live performances for about 18 months, we most certainly were not inactive!

CARRY ON STREAMIN ... was intended to help raise money for Edinburgh FC's Paddy Bort Fund. We published this on-line magazine fortnightly from mid-April 2020 until late August 2021, along with its companion video compiled using tracks donated by a range of folk acts. The magazine contained news-ie snippets from 'wherever' (no borders here!), album reviews, interviews, articles of all kinds, pictures ... and anything else we feel like including. Many thanks to the contributors - in print and in video - who helped keep our show on the road. However, by late July 2021 with the pandemic looking to be waning and the PBF receiving fewer appeals for help, we decided CoS had served its useful purpose and the last two editions (CoS 2.01 and 2.02) were monthly. We will now be publishing a much simpler club newsletter on two sides of A4 starting next week (Monday 20 September 2021).

There's also of course(!) a PayPal button here to so you can donate whatever sums you like to the cause / PBF.

CARRY ON STREAMIN
ARCHIVE OF VOLUME 1

CARRY ON STREAMIN
ARCHIVE OF VOLUME 2