The programme of events for September to December 2018 (inc) is now complete - SEE BELOW for the start of it.

Good progress is being made in sorting out the programme from January to June 2019 (inc) - and there are some really good looking gigs in prospect.

The full giglist for September to December 2018 is at bottom right of this page.

IMPORTANT: The EFC AGM takes place at 8pm on Wednesday 5 September 2018 in the usual venue - downstairs in The Royal Oak, Infirmary Street. All are welcome but only fully signed up EFC members can vote.

Tickets: Edinburgh FC's on-line box office
(and at the door from 7:30pm) 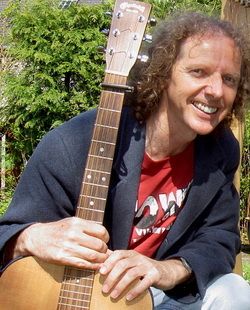 Colum Sands is a universal storyteller who draws on a long Irish tradition of poetic musicality to weave songs for the world. He has performed in over 30 countries around the world confirming the universal appeal of the songs and stories with which he observes the minute and often humorous details of life.

On his travels Colum soon discovered that many of his songs had arrived before him carried by singers in their live shows or recordings - the likes of Andy Irvine, Tommy Makem and Liam Clancy, Roy Bailey, Mick Hanley, Gerard van Maasakkers, Rosemary Woods, Iain McIntosh and Enda Kenny.
He has toured all over Ireland and the UK as well as in Australia, New Zealand, Canada, Germany and Denmark. Colum is working currently on a new album due for release in summer or late 2018.

" ... Colum's gift is of breaking down cultural barriers through choice words and eloquent music. (John O'Regan, Rock 'n' Reel)
"An unforgettable, wonderful performer. I've just seen him play to 2500 people in the Australian National Folk Festival's biggest venue and make everyone feel as if they were

Welcome to the official website of the internationally renowned Edinburgh Folk Club - probably the best folk club in the world!
This site began on Monday 15 June 2015 and continues to develop.  Bookmark it now.

ADVANCE TICKET ORDERS
Please use the "book tickets in advance" link alongside each gig to order advance tickets.
NEW SEASON

RESIDENT PERFORMERS
EFC has asked the performers who you will often see doing the opening spots on club nights, to join the list of resident performers which we're just beginning to compile. So far we have - with many thanks - and in alphabetical order ...